Here is a quick recap of the visit my sis, niece, nephew and I had to Sequoia National Park this week! 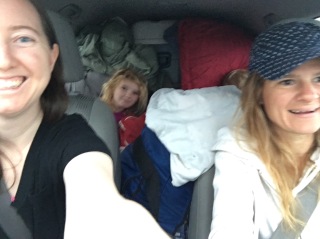 Sarah and I were up at 5am on Monday morning so we could do our best to beat traffic. Our car was PACKED with all the stuff we needed, and lots that we didn’t. We thought it was going to be very very cold, based on the weather reports we’d seen. Those ended up not being for where we were camped, so we brought a lot of extra cold weather clothes and blankets that we didn’t use.

The Exeter water tower! This was our last major-ish town before we turned up the 198 to head into the park. We stopped and had lunch, and I called and texted David for the last time.

The first pull off in the park is of course for the sign! We just had to stop! 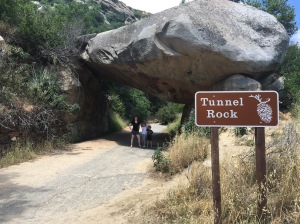 We assumed that people used to be able to drive through this, but the road has since been diverted around Tunnel Rock.

Our first hike involved putting our feet in the extremely cold river. Brr!! 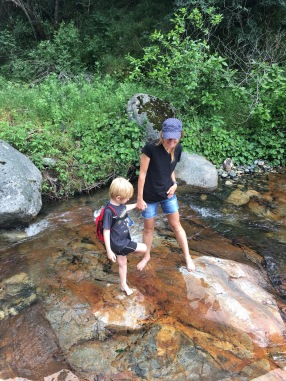 But it sure was beautiful!

After dinner our first night, I walked down to the pay phone to try and call David. There happened to be a woman in a very lengthy conversation, so I headed back to camp. On the way down, I had seen a young couple across the way from us trying to start their fire. On the way back, they were sitting on their picnic table like they had given up. I looked at them, they looked at me, I looked away, I looked again, they looked again. Finally, the boy said “Excuse me”, so I stopped to see what he wanted. They were having trouble starting their fire, so I agreed to help them. Turns out they had purchased huge pieces of wood that were never going to catch in a starter fire. I did eventually help them get a fire started, after I went to our site and brought them some of our wood. I told them that they could join us at our fire if they’d like to make s’mores. They had s’more making items, but alas, nothing to roast the marshmallows with. I again offered up our roasting sticks, as we only needed two and had 4. They ended up coming over to join us, and we got to know them and had a lovely conversation. We ended up burning more wood than we intended, because we stayed up later hanging out with them, but that is part of the fun of camping. A good time was had by all. We then ended up running into them in the bathroom shortly after they had gone back to their site while we were all getting ready for bed. Turns out the light in the mens room didn’t work, so we all shared the small womens bathroom. All of us (me, Sarah, K & E) are hoping they get a storybook ending.

Day 2 finally meant getting up into the foresty area! This is where the giant sequoias grow! We were super excited about getting to see them! The kids had been point to every tree and asking if it was a sequoia, and we had to keep saying no, until we got here!

A deer! We were excited about seeing these guys! In total we saw at least 3 deer. It was way awesome.

This was a cool part of the Congress Trail where they hadn’t cut down a tree that fell across it. It was neat to get to walk under it! 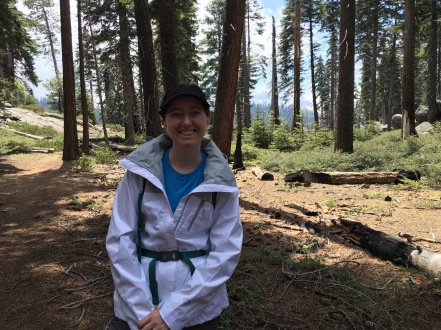 We got a little glimpse of the beautiful snow capped mountains! This whole area was just lovely.

On Wednesday, we were headed up towards Lodgepole for some hiking and saw a guy standing in the road, who gestured to us to pull over. His wife had spotted a bear on the side of the road, so of course we stopped to look. Katie had been wanting to see a bear, and so had the rest of us. We were very fortunate to get to see one at a safe distance. It is hard to tell in the pic, but that’s a black bear.

The hike up to the top of Moro Rock was filled with stunning views. All the views are amazing, but this one, with the snow-capped mountains in the background was just breathtaking. 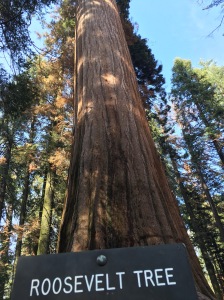 After the Moro Rock hike, we saw the sign for the Roosevelt Tree. It was only .1 miles, so I decided to quickly see if it was worth everyone hiking to go see it. It was cool, but it was another sequoia, and we had seen much larger, more impressive ones, so no one else went to see it.

We had seen a sign both days we went up for a little trail called Big Fern Springs. We hadn’t stopped the previous times we’d seen it, but decided on the way down on Wednesday to stop and look at it. There was a peacefulness to the area that was totally worth the stop. The sound of the river and the birds was very relaxing. 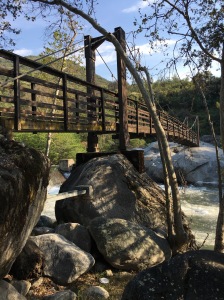 While speaking with a ranger at the Lodgepole Visitors Center we discovered that there was a not well known hike to an old indian village, and it just happened to be right across the road from our campground! We decided to check it out, and there was this amazing suspension bridge crossing the Kaweah River. It was pretty neat to see where the Patwisha lived.

Overall it was an awesome trip. Of course I wish we could have stayed there for longer, but at the same time I was glad to get home. Now we just have to plan another adventure!

2 thoughts on “A Visit to Sequoia National Park”